This pleasant walk along the beach from Bamburgh Castle to the lighthouse, returning via the church is about 3 miles and will take about 1hr 30 minutes - 1hr 45 minutes. Bamburgh is on the coast just north of Seahouses and about 5 miles from the A1 on the B1432

1. Drive through the village and park in the free car park opposite the castle.


2. Cross the road and walk up the small road opposite towards the castle entrance. At the top take the path heading down through the dunes towards the beach keeping the castle to your left. From the beach you will see Inner Farne Island and will have a stunning view of the Castle.


3. Turn left and set off along the beach keeping the castle on your left. As you near stag rock and the lighthouse you will see Holy Island in the distance. Walk across the expanse of rocks and continue up a small grassy hillock to the lighthouse. This is a good place to stop and rest and admire the wonderful views back to the castle.

4. Retrace your steps back along the beach for a while until you see a car park above the dunes on the right. Cut across the sand dunes and head up to the car park, Cross the car park and turn left onto a small road. Follow this road until you reach the village. Turn right and walk a short distance before reaching St Aidan's church on the right. This lovely church is well worth visiting and in the churchyard you will find the tomb of Grace Darling. Opposite the church is the Grace Darling Museum which is also worth a visit.

5. Leave the church and turn left back to the village. Continue to follow the road as it passes the castle and back to the car park. 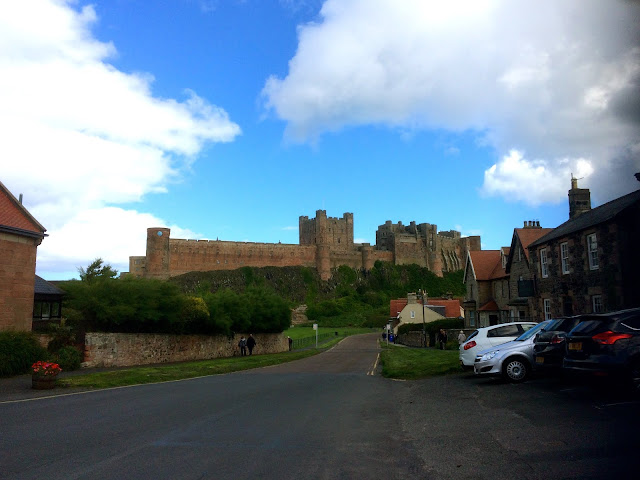 Bamburgh is a small picturesque village on the North Northumberland coast. It is a about 5 miles from the A1 on the B1432 and a few miles north of Seahouses becoming popular with visitors to the magnificent Bamburgh Castle. The village contains numerous gift shops and places to eat and is a lovely place to spend a relaxing afternoon. In the peaceful churchyard of St Aidan's church is the tomb of Grace Darling and directly opposite is the Grace Darling Museum.

Bamburgh Beach is a beautiful, wild sandy beach overlooked by the towering castle. the beach, backed by sand dunes has stunning views to Holy island and the Farne Islands. It is worth taking a walk to the stag rocks and the lighthouse.


Bamburgh Castle
Bamburgh Castle is a magnificent ancient fortress overlooking A glorious sandy beach. Situated on the top of a rocky outcrop the castle has wonderful views to Holy Island and the Farne Islands.

Bamburgh Castle was built by the Normans in the late 11th century to replace a Celtic Brittonnic Fort known as Din Guarie, which was destroyed by the Vikings. By 1164 the keep had been built and the castle was complete. The Forster family were governors of the castle until 1700  when Lord Crew and his son son John took over. In 1894 the castle was purchased by William Armstrong, a Victorian Industrialist. The castle is still owned by the Armstrong family who remain in residence.


St Aidan's Church
St Aidan's Church was built in the 12th century, replacing the original wooden church founded by St Aidan in 635. In the peaceful churchyard of this picturesque church is the tomb of Grace Darling.

Jedburgh is an attractive market town in the Scottish Borders. It is situated on the banks of the Jed Water and is about 10 miles from the English Border. This historic town has had a turbulent past and has been raided and attacked by both Scottish and English forces many times.

The town is home to the ruinous Jedburgh Abbey and in 1566 Mary Queen of Scots stayed in a house in the town that has now become a museum. Jedburgh Castle was built in the 12th century and was fought over many times during the Wars of Scottish Independence. Unfortunately, although it was occasionally used as a Scottish royal residence the castle was demolished by the Scots in 1409. In 1823 a jail was built on the site of the old castle. This closed in 1868 but has been restored to its original appearance and is now open to the pubic as Jedburgh Castle Jail and Museum.

Jedburgh Abbey
Jedburgh Abbey was founded by King David I in 1138. It was originally both a priory and monastery and was home to a group Augustinian Canons until the 16th century. The abbey had a torrid time during the Wars of Scottish Independence and suffered many raids and attacks. These continued throughout the following centuries as the abbey slowly fell into disrepair. By the time of the Reformation in 1560 the abbey was in a poor state and was allowed to fall into disrepair. The church was used as a parish church until 1871 although some repairs were carried out in the late 1800's the abbey and church were never used again.

Mary Queen of Scots House is a museum in the town where it is believed Mary stayed for several weeks after falling gravely ill on her return from a 30 mile ride to visit James Hepburn, the Earl of Bothwell at Hermitage Castle.

The museum is devoted to the life and death of Mary with many interesting displays and memorabilia. Of particular interest is Mary's death mask and a copy of the Execution Warrant.

Jedburgh Castle Jail was built in 1823 on the site on the old castle which was demolished in 1409. Although modified in 1847 it was closed permanently in 1868. In 1968 the building was restored and opened to the public as a museum. In addition to the museum in the old jailers house the original cell blocks are open to the public providing a fascinating insight into life in an 1820s prison.


Jedburgh Abbey is situated on the edge of the town of Jedburgh in the Scottish Borders. The substantial remains of this once grand abbey sit proudly overlooking the river and guarding the town.

Jedburgh Abbey was founded in 1138 by King David I, prior to his ascension to the Scottish throne for a group of Augustinian Canons. Initially the church was known as a priory and then a monastery before being raised to the status of Abbey in about 1147 and was dedicated to the Virgin Mary. After King David's death in 1153 the patronages and privileges of the abbey were accorded to his grandsons, Malcolm IV  and William I (William the Lion) of Scotland. In the 13th century the nave and choir were added.

Four great abbeys were established in the Scottish Borders in the 1100's, Jedburgh Abbey, Melrose Abbey, Kelso Abbey and Dryburgh Abbey. Unfortunately all these suffered severe damage during the many conflicts during the Scottish Wars of Independence and into the 15th and 16th centuries. In 1297 as retribution for the defeat of the Earl of Surrey at Stirling Jedburgh Abbey was pillaged and wrecked by the English, who attacked again in 1346. Although in 1370 the north transept was completed in 1410, 1416 and 1464 the abbey suffered repeated attacks. In 1523 both the town and abbey were set ablaze and in 1544 the abbey was attacked yet again.

Subsequently the abbey started to fall into disrepair and by the time of the Reformation in 1560 there were only a handful of cannons remaining. The abbey church was used as the parish church until 1871 when a new church was built. During this time the rest of the abbey fell into ruin. Although in the late 1800's some restoration to the church was carried out it was never used again.

This lovely walk will take you through the grounds of the elegant Paxton House and along the banks of the majestic River Tweed before returning to Paxton.

1. Leave the Cross Inn in Paxton, passing the church before turning left into Schoolers Row. At the junction turn left onto the B6460 and walk down the road towards Paxton House at
the end.
2. Cross the road and proceed through the gates of Paxton House and down the long drive. After crossing the bridge at the end of the drive head straight across the grass towards a path leading downhill towards the river. The path will take you past a children's play area and then descend sharply down to the boat house at the bottom.

3. Turn left to walk along the river bank away from Paxton House. Carry on over a little bridge and past a path leading up through the trees. Continue along the river bank passing some fishing shiels until you reach a grassy area and an old road on your left. This is old boundary road.

4. Retrace your steps back along the river bank until you reach the little bridge. Turn right and proceed along a path uphill through the woods.

5. Carry on through the woods passing a burn on your left until eventually you will arrive back on the main drive near the bridge. Turn right and retrace your steps back to the main road and back to Paxton.
No comments: