Holy Island (The Holy Island of Lindisfane) is an Island on the Northumberland coast joined to the mainland via a tidal causeway. The Island is a beautiful tranquil place with views across to Bamburgh Castle. Sandy beaches, rocky outcrops, the picturesque village and the small harbour make a visit to the island an idyllic retreat. In addition to the quiet village and harbour the island houses the remains of the 12th century priory. The small castle sits proudly on a hill overlooking the sea.  Holy island is also well known for Mead, which was originally produced by the medieval monks. Lindisfarne Mead is still produced today in St Aidan's Winery and sold throughout the UK.

Before any visit to the island it is essential to check the tide times, allowing yourself plenty of time to leave the island. Holy Island is a few miles from the A1 through the village of Beal and across the causeway. There is plenty of parking on the island but many prefer to park before the causeway and walk across.

Lindisfarne was given its name by the first Anglo-Saxons to live on the Island. It was not until after the Norman Conquest that the monks of Durham added the words Holy Island. The period of the first monastery is referred to as the "Golden Age of lindisfarne" when Aidan and his monks cameo from Iona, setting up a  monastery and a school introducing the arts of reading and writing. After the Norman Conquest the Benedictine monks of Durham set up the second monastery which was finally dissolved in 1536. This became known as "The Benedictine Period". Although the first monastery has completely disappeared evidence suggests that the parish church of St Mary the Virgin stands on the site of Aidan's original monastery. 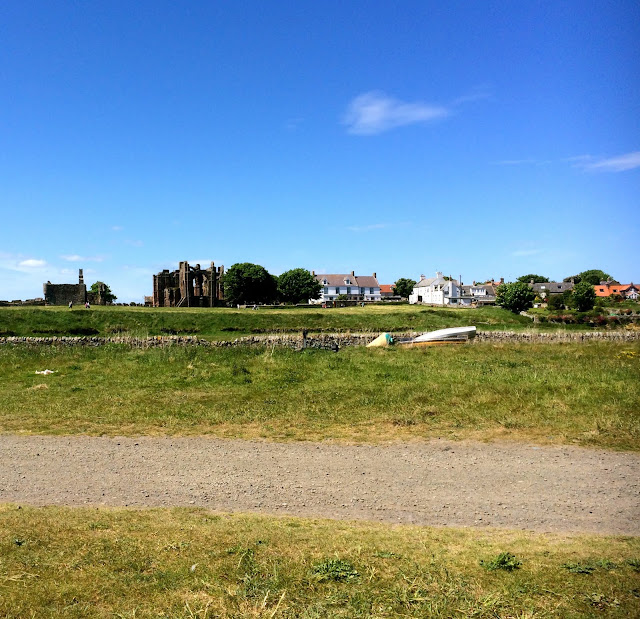 Lindisfarne Priory
The site of the original priory built in 634 by St Aiden is now occupied by the parish church, but a short distance away are the substantial remains of the later 12th century priory. St Aidan was an Irish monk who came to the island from Iona, establishing a monastery and remaining until his death in 651. The monks continued to live and work at the priory until 875 when fearing an invasion by the  approaching Danish army fled taking the bones of St Cuthbert with them. St Cuthbert was both a prior and bishop on Lindisfarne and when he died on Inner Farne in 687 his body was returned to Lindisfarne and buried. When the monks fled in 875 they took his bones with them and they were later buried in Durham Cathedral. In 1093 the priory was re-established as a Benedictine House until its suppression by Henry VIII in 1536.

Lindisfarne Castle
The castle sitting on Beblowe Hill was built in 1550 using stones from the disused priory. It is a small castle and was based on a Tudor Fort. Elizabeth I ordered the castle to be strengthened and gun platforms were added. However, during the reign of James VI the need for the castle declined and only a small garrison remained. In 1860 Lime Kilns were built and lime burnt on the island until the start of the 20th century.

Church of St Mary the Virgin
This beautiful old parish church is thought to stand on the site of Aidan's first monastery and has remained the villager's church for centuries. The church dates from between 1180 and 1300 and is the oldest building building on the Island. However, a small section of stonework suggests some Saxon heritage.