Allanton is a small village in the Scottish Borders stretching along the B6437 on the way to  Chirnside and about 6 miles from Duns. The Blackadder Water flows into the Whiteadder Water just before the Allanton Bridge and is crossed by the Blackadder Bridge.

The village was originally part of the estate of the Blackadder family who were notorious for their involvement in the border feuds. The family extended their lands by grants bestowed by James II of Scotland as a reward for repelling English raids. In 1518 the Home family, by marrying into the Blackadder family gained ownership of the village

The houses in the village street date back to the late 18th and early 19th centuries. A number of residence and shops fronted the street, including in the early 20th century three tailor's shops. Most of he properties were built to house staff or service the family and staff of the now ruinous Blackadder House.

Blackadder House
Blackadder House was an impressive mansion with an entrance flanked by two lodges leading from the main street. Many of the large number of servants were housed in the village. The estate comprised of the village, along with several farms.

Blackadder House, a grand Palladian style house was built on the site of an original Tower House. In about the mid 18th century the original tower house was rebuilt and further extensions in the mid 19th century created an elegant mansion. In World War I the mansion was requisitioned and used to accommodate troops. Unfortunately it was vandalised by the troops and in 1925 was demolished. The ruins of the house and power house in addition to bridges over the Blackadder Water remain today.

The Allanton Inn
The Allanton Inn is situated along the village street surrounded by picturesque houses. This former coaching inn dates from the 18th century when most of the village properties were built. In the 1830's two cottages were joined to form the inn with a stable and hayloft attached. 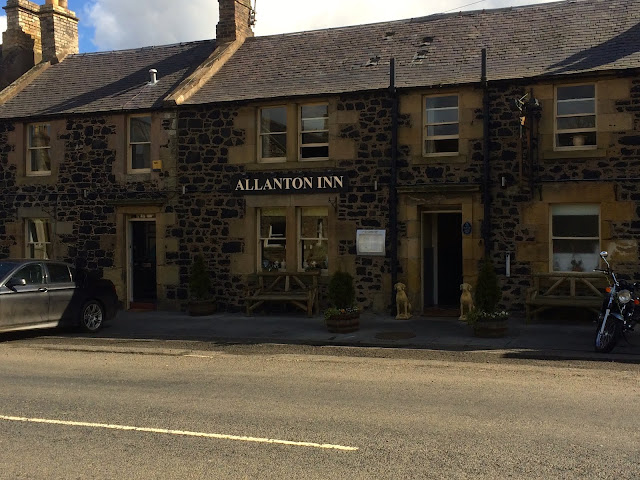