Pevensey is a village near Eastbourne in East Sussex. The village which lies about one mile inland from Pevensey Bay has grown up beside the remains of Pevensey Castle. The picturesque village sits beside the neighbouring village of Westham and is served by the train stations of Pevensey Bay and Pevensey and Westham.

St Nicholas Church was built between 1205 and 1216 on the original site of a Saxon priory church dating from the 5th century. The old Pevensey Court House and Gaol built in 1541 sits beside a number of Tudor houses.  This is now a museum and houses the old court room, dock and prison cells.
The name Pevensey is derived from the Anglo Saxon personal name "Pefen" plus "eau"meaning  "River (of a man named) Pefen" and was first mentioned in a charters dated 788 and 790. In the 5th century a Saxon priory was built where the church stands today, overlooking the sea. Pevensey's history is entwined with the castle and earlier Roman fort built between AD 300 and 340. After the Romans left Britain was invaded by the Saxons who took over what its now the county of Sussex. The castle at Pevensey was burned and left derelict. In 1066 the old fort was taken over by the Normans who used the remains as the base for their new castle.
The village grew up around the castle and in the 16th century became a limb of the Hastings part of the Cinque Ports. During the 18th and 19th  centuries the village became involved in smuggling and in 1833 a violent clash took place at Pevensey Bay between customs men and the smugglers. 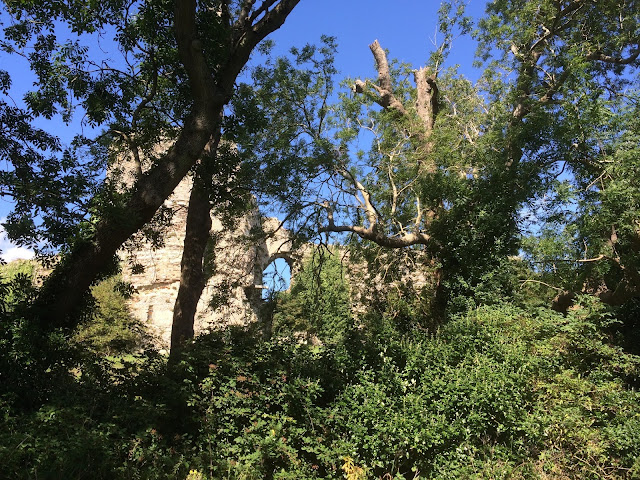 St Nicholas Church
St Nicholas Church was named after the patron saint of seafarers. The church was built between 1205 and 1216 on the original site of a Saxon Priory dating from the 5th century. Most of the church was constructed during the 13th century but by the mid 16th century it was said to be in a poor state. Renovations were then carried out and again in the late 19th century.

This medieval castle, a Roman Saxon Shore Fort, known as Anderitum was built about 290 AD by the Romans on an area of sand and clay sitting about 10 meters above sea level. At the time the spur of land was a peninsular projecting into a tidal lagoon and marshes. It is thought that a harbour was situated near the south wall of the castle which was sheltered by a split of shingle, where the the village of Pevensey Bay stands today. Over time land reclamation and silting in the Pevensey levels have pushed the coastline out over a mile leaving the castle landlocked with an area of flat marshland stretching to the sea.

By the late 16th century the castle had been abandoned and remained ruinous until 1925 when it was acquired by the state. During the Second World War the castle was used by the Home Guard, British and Canadian Armies and the United States Army Air Corps. The machine gun posts can still be seen today.