St Abb's Head is a series of rocky cliffs situated on the east coast of the Scottish Borders. It is about 17 miles from Paxton, about 26 minutes drive via the A1 and B6438. St Abb's Head can also be reached by bus from Berwick-Upon-Tweed. The stunning cliffs sit above the pretty fishing village of St Abbs and are a haven for birdlife. The cliffs form part of the Berwickshire Coastal Walk, however there are also a number of shorter walks around St Abb's Head. Parking in the car park near the National Trust Centre is a good place to start and will ensure that you end with a well earned stop at the cafe.


St Ebbe
St Abb's Head was named after Ebbe (Aebbe), the daughter of Aethellfrith, the first King of Northumbria. From 643 to 680 Ebbe was abbess of a monastery on Kirk Hill. Both monks and nuns lived at the monastery, however a few years after Ebbe had died the monastery was accidentally burned down and never rebuilt. Ebbe was sainted for helping to spread Christianity and St Abb's Head was named after her.

St Abb's Head Lighthouse
Before the lighthouse was built in1862 a signal stationed been established on the cliffs. However in 1857 after the "The Martello" had sunk on the rocks the Northern Lighthouse Board  recommended the building of the lighthouse. The lighthouse was manned by three full-time keepers until 1994 when it became automated.

St Abb's Head is a National Nature Reserve, owned and run by the National Trust. The cliff are home to thousands of seabirds and colourful vegetation. Wild grasses and flowers grow in abundance on the rocky grasslands while the rocky reefs provide a home to a variety of plants and animals. 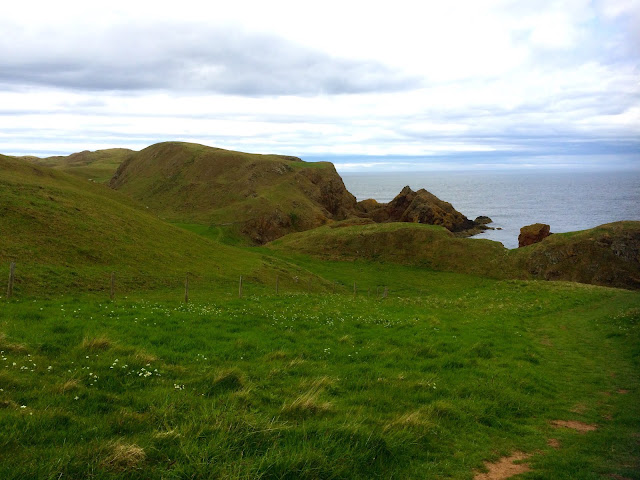 Just beyond the lighthouse is Mire Loch, a tranquil, man made freshwater Loch which is home to a variety of birds and freshwater pond life. After walking to the lighthouse head towards the Loch where you can stroll along its banks on your return journey.

To enjoy the beauty of the nature reserve a walk along the cliffs to the lighthouse is highly recommended. The dramatic beauty of St Abb's Head makes it a pleasure to visit in all seasons.